What to see in Iceland?
Everything, simple isn’t it?

Iceland is one of those places where you could stay months and months and be amazed like the first day.

There is so much to discover and to know that it would require a year of planning at least before being visited! And certainly a weekend or a 5-6 days holiday are very few. 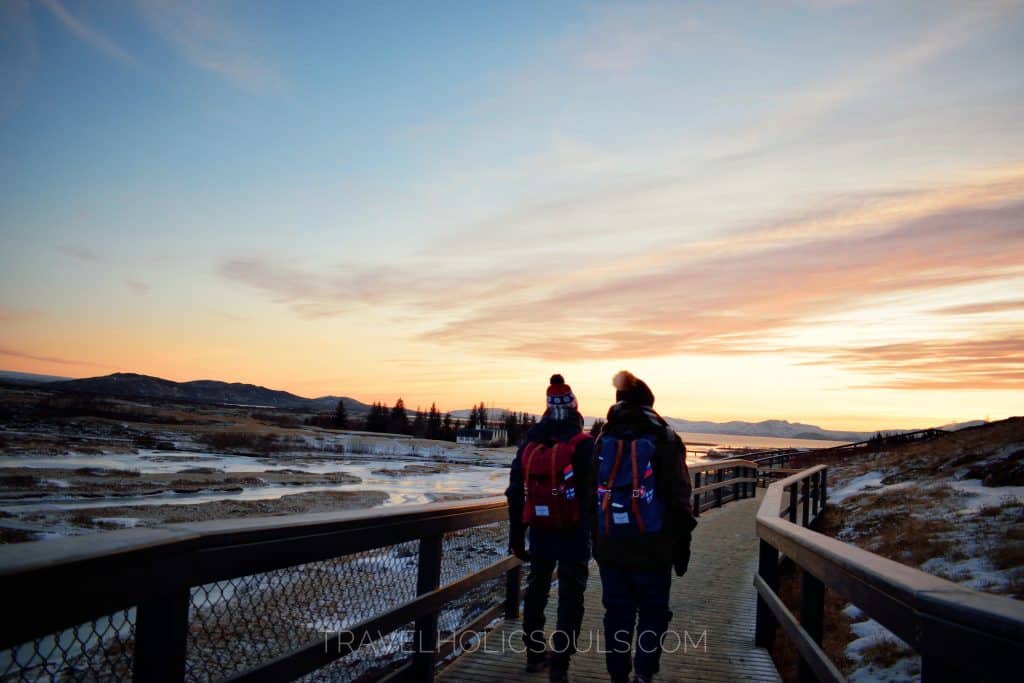 Did you know that?

So, while the “time” problem has been overcome with the promise of coming back as soon as possible, the “planning” problem has been faced allowing that the leader of the exploration would be an expert, a guide, who’d live there and know all the pros and cons of the area that we would go to discover. 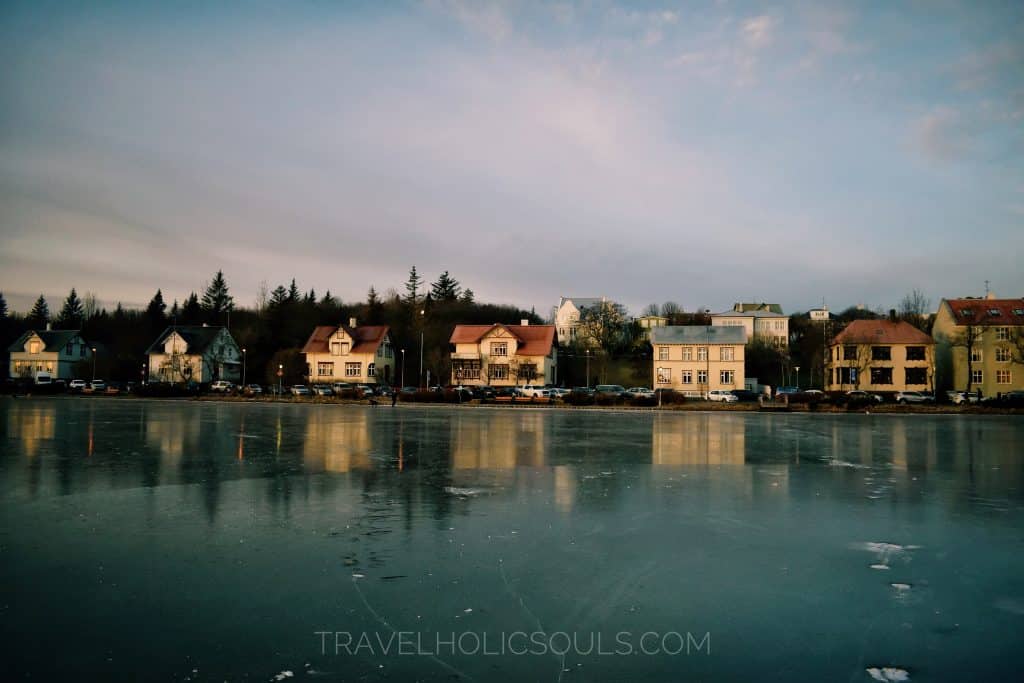 And yes, because unfortunately when the time is short, you have to make choices, give up something and after a lot of thinking we decided to dedicate at least a couple of full days to the area closest to us: Reykjavik and the Golden Circle.

→ Discover also where to sleep in the Icelandic capital ←

Why rely on expert hands to enjoy all these wonders?

As we have explained several times, we do not like to go on organized tours because the idea of being bound by schedules, people, paths … well, it makes us nervous.

However, in Iceland, we could not do otherwise. As good travelers, we know what our limits are and when to ask for expert hands.
Here, we, about what to see in Iceland, we relied on Frederik, a lovely Icelandic man that always wore a cap on his head.
We went on a two-day tour: the first, focused on the capital and the trip to the Blue Lagoon; the second dedicated to the gold completely circle.

Duration: 16 hours divided into 8 hours at a time

For more info, we refer to the official website.

Reykjavik, the proof that dimensions make no difference

Frederik brought us around Reykjavik, telling us the story of the city, explaining the reality of the different neighborhoods, without ever neglecting anecdotes and smiles.

And for “brought” we mean that we were on a minibus and we stopped every panoramic point we approched, listening to his explanations.

You probably never thought about it, but Reykjavik is the most northerly European capital.

Despite the size and its (only) 12,000 inhabitants that will make you struggle to compare it to other European capitals, Reykjavik has nothing to envy anyone.

Indeed, the small Icelandic capital is actually a giant in terms of design and architecture.

Head towards the center and you will be in front of the immense church of Hallgrim.

Its avant-garde architecture will not fail to impress you (it does not matter if in a positive or negative way but it will!) Even if what really leaves you speechless is the view that can be enjoyed from the top of the bell tower.

Sunrise over the Hallgrim church

The particular form has the intent of paying tribure to the basalt columns of the Svartifoss waterfall while the church’s name was named after the pastor and writer Hallgrimur Petursson.

Do you need another one?

Head to the harbor and let yourself be hit by the strangest thing you will see. We can bet it will be the Harpa Concert Hall.

This cool glass building is simply the concert hall of the city.

Our guide kept us guessing telling us with pride anecdotes about his city and nation.

He told us anecdotes about locals explaining their unconditional love for heated pools.

“The wealthiest people buy houses in the countryside and build the pool so you can spend the evening soaking waiting for the Northern Lights!”

and about the little lake of Tjornin, the meeting point with friends.

But not just these things! He has dispelled the myth that in the north all the children leave their parents’ home very early, explaining that the island expensive cost of living actually prevents it to almost 70% of young people.

He kept us company telling us everything we did not even know we wanted to know until lunchtime.

At that point, we had an hour and a half to eat before leaving in the direction of Blue Lagoon. We have already talked about it right here!

What to see in Iceland absolutely: the golden circle, 300 km of “wow”!

The golden circle is so called because on this circumference of 300 km are concentrated geological areas very different from each other and all of incredible interest, “gold” for tourists. 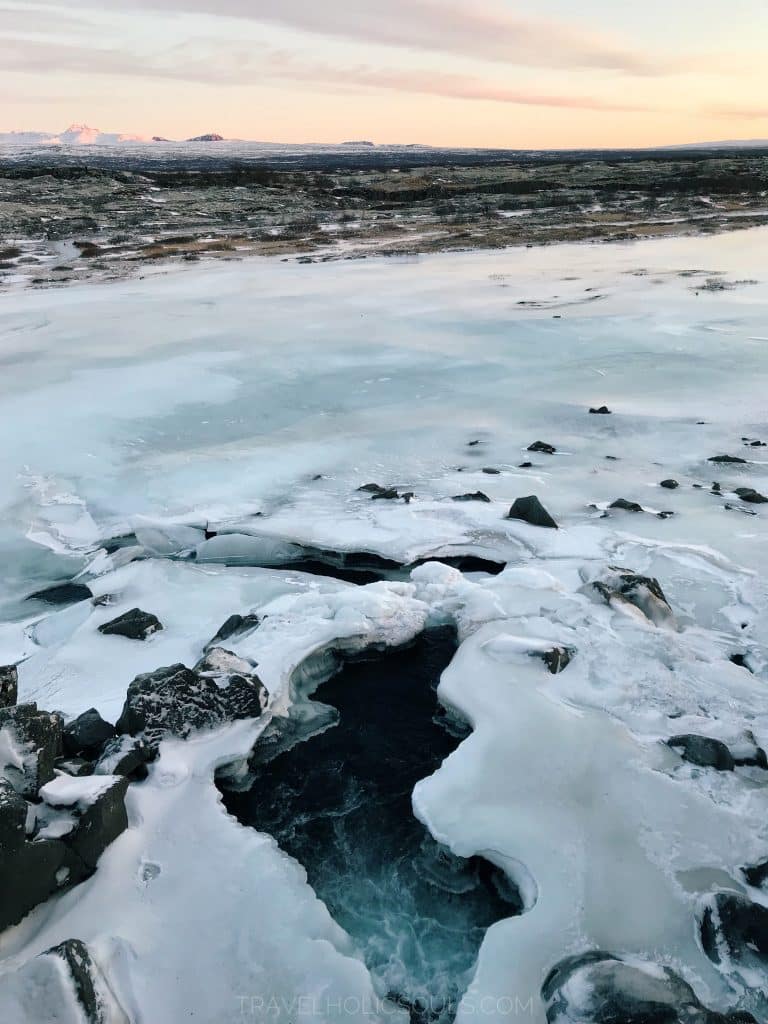 Starting from Reykjavik, unbelievable are the Þingvellir National Park, the Gullfoss Falls and the geothermal area of Haukadalur, containing the Geysir and Strokkur geysers.

Faxi: the first show you will see

We left at 8 in the morning and we covered the first kilometers in the darkness that distinguishes the winter mornings in Iceland.

When we arrived at the Faxi Falls the light was still quite dim, the frozen snow made the path dangerous and the cold was pungent … nevertheless the wonder in front of such a place was amazing.

We were told “it’s nothing compared to Gullfoss” and we could not imagine anything better.

Have you ever seen a waterfall?

You will surely have tried a sense of smallness that you could not explain, right?

This waterfall stood there, in the middle of a valley; the sky was becoming clearer and a house in the distance disturbed the horizon line.

They are not very well marked in the map and for this reason they are never invaded by tourists, this makes the place even more beautiful.

You are alone with the noise of the water that tears.

Gullfoss: the queen of the waterfalls

The distance from this place to Gullfoss is not much but enough to feed imagination and expectations.

It happened that we got off the bus and in front of us we found a speechless sight: a crack of the earth and this stream of water to flow through it. If it were not quite as impressive as it was, the snow add something more.

Have you ever seen anything that snow can not make magical?

It is no coincidence that this waterfall is nicknamed “the queen of all Icelandic waterfalls”.

This place is probably always magical, with rain and sun and wind … but the snow made us live this situation even more intensely.

“And think, guys, that we risked not to be able to live such a show!” The guide told us so, out of blue.

Only later he explained to us that in the 1920s British investors had decided to buy the waterfall to build a dam that would fed a power plant and that only the courage of a young peasant woman (who threatened to commit suicide if the project was approved) this was not possible.

“Or rather, this is what the legend tells,” he added.

The truth is that in the end, the case (to which even a very young not yet Icelandic Prime Minister Sveinn Björnsson participated) was won by the investors but that they themselves gave up the idea of building the dam.

We had a hot chocolate time in a nearby bar and headed back to Haukadalur.

What to see in Iceland absolutely: Haukadalur

Many geysers are concentrated in this area.

You all know what they are, right?

Intermittent jets of hot water that burst upwards with the possibility that they reach a few tens of meters in height.

But not everyone will know that the name geyser means “intermittent eruption” and it owes its name to Geyser, the most important and famous Icelandic one.

In fact, while today Geyser has unpredictable eruptions of about 8-10mt, once its splashes reached heights of over 100 meters!

Following the guide and the catwalk we ended up in front of the Strokkur: a geyser whose activity is recorded every 4-5 minutes on a height of about 10-18 meters!

We waited for the necessary minutes trying to blink as little as possible to not miss the moment of the explosion.

A thunderous noise, a light rain and a jet of very high water.

All lasted a few seconds. Even if only on paper, inside us, even now, if we think about it, we wonder how amazing nature is.

What to see in Iceland, absolutely? A geyser that breaks out.

Thingvellir: an unexpected and unique stop

… but on the way we made a detour.

You will never guess!

We stopped at a farm and met the most beautiful of Icelanders.

Ladies and Gentlemen, the horses!

Icelandic horses are a must to see, absolutely!

They are not like normal horses, they look like little pony with long hair, and they are so sweet tooth.

You can’t imagine what a pleasure it made us see them and give us this little deviation out of the plan.

Ladies and Gents, the most beautiful inhabitants of Iceland

Back on the bus, our Frederik prepared us on the last place of the golden circle (last but not least) talking to us and explaining why it was so important.

In fact, there is no more historically important place than this: in 930, right here, the oldest parliament in Iceland and in the world was founded.

Legend says that, around the year 1000, it was decided that Christianity would become the official religion and in 1940 instead, independence was proclaimed.

As far as the naturalistic aspect is concerned, no explanations were necessary (even if finding out that this is precisely the point where the continental fractures of Europe and Asia were joined, we were very impressed) but we just looked around to understand.

We do not want to bore you with naturalistic information that we do not even have the competence but to convince you that not putting a place like this in the list of “what to see in Iceland” could be one of the biggest mistakes of your life!

Both the park and the multimedia center have free admission.

The park has no timetables.

Details: The multimedia center offers an overview of the history of Iceland and a series of clarifications on the nature of the place with the possibility of having materials in English or French.

We refer you to the official website for more info.

We told you everything, during the journey back, what we tried to do was assimilate what we had just seen and experienced, all that amount of images that kept banging into the skull.

We do not know you, but for us, this awareness, about how the world is an absurd place, never leaves us, never, never indifferent.

So who is planning his next tour in Iceland? We hope you now have all the info on what to see in Iceland.
Please let us know in the comments below.

DISCLAIMER – THE TOUR HAS BEEN CARRIED OUT IN COLLABORATION WITH TRAVEL REYKJAVIK.
HOWEVER, ALL REVIEWS AND OPINIONS ARE HONEST AND UNBIASED. 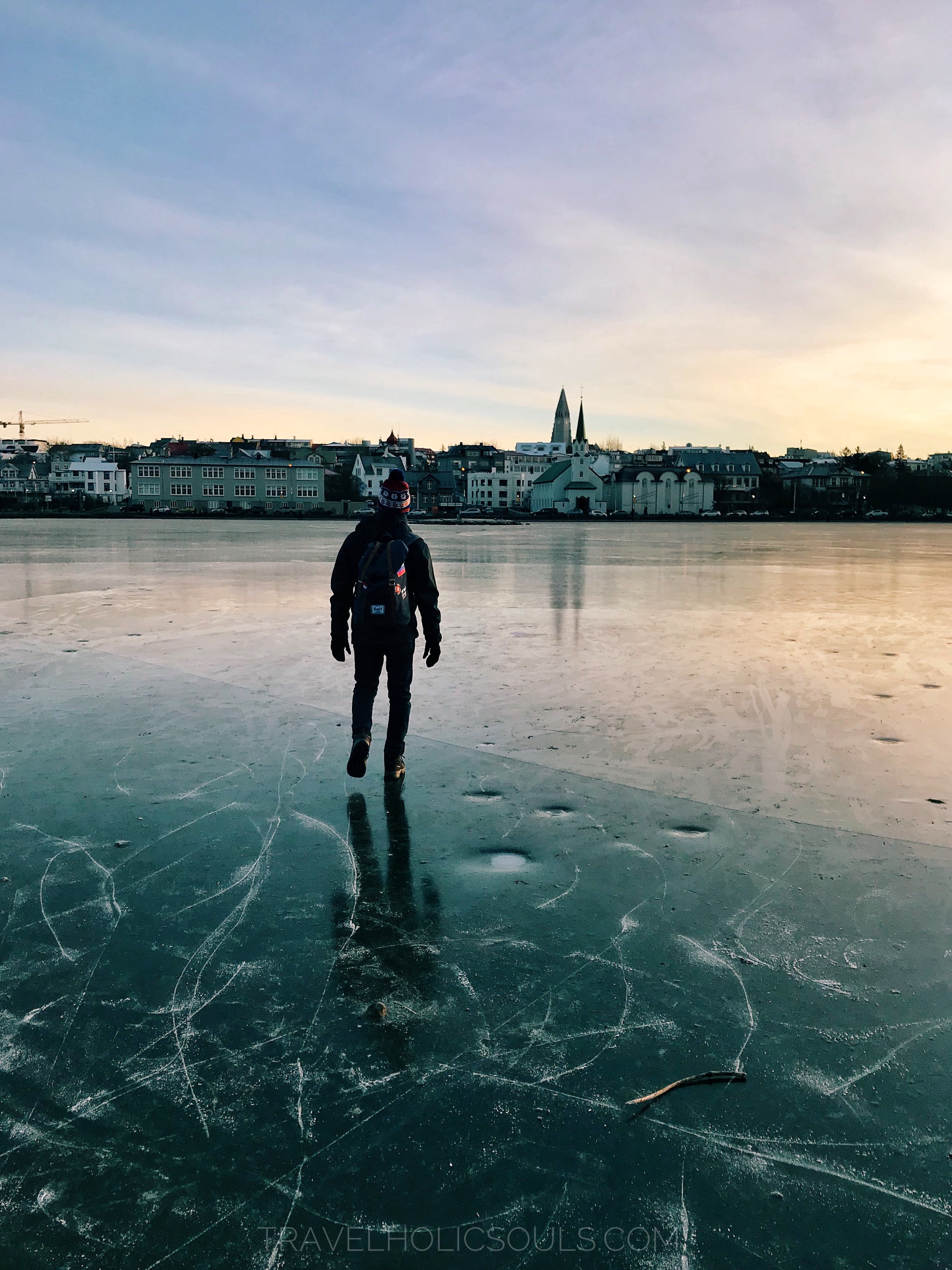 Zineb (25) and Simone (29), exploring the world a weekend at a time. We are that kind of a couple who prefers a handful of memories instead of everything else. We are a couple who used to come back home after a journey more in love of life, of the world, of ourselves. 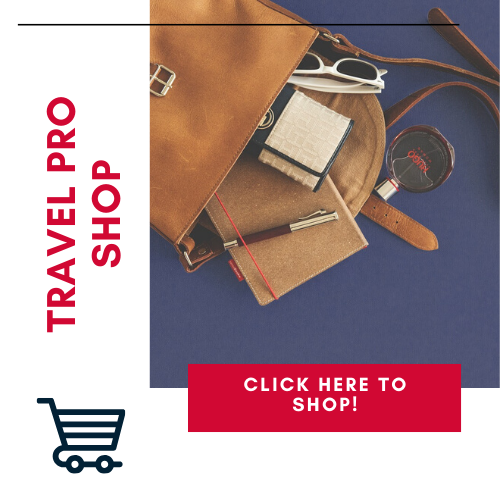 ⁣🇬🇧 Do you know what we decided to do? Wel

⁣🇬🇧Usually around this time of the year we

⁣🇬🇧 Today’s post is all about the fact t

⁣🇬🇧This is me, looking at all the trips i

This error message is only visible to WordPress admins


Error: API requests are being delayed for this account. New posts will not be retrieved.