Back in time to the greatness of the Tsarist era, when there was an undeclared race among the various European monarchs on who had the most luxurious, brilliant, extravagant and economically more demanding palace. Back in time when summer residences were a must, when the parks surrounding the palaces were beautifully kept in order and they referred to bucolic realities.

And then, guys come back to the present that we will make you jump into the past. Ladies and gentlemen, the palace of Catherine.

This luxurious residence, now UNESCO World Heritage Site, it is located in Pushkin, a small town about 25 km southeast of St.Petersburg.

Dated to 1717, this palace was dedicated to Catherine I, the favorite wife of Peter the Great.

At his death it was inherited by his daughter, Empress Elizabeth, whose unpretentious taste made her residence to have over 100 kg of gold, Baroque statues and fringes.

She just ordered the Italian architect Rastrelli to create the most famous Amber House or Amber Room. A room that was probably destroyed after the transfer to Köningsberg (current Kaliningrad) wanted by the invading Nazis.

The building then had a further stylistic modification wanted by Catherine II of Russia. Zarina, called Catherine the Great, she decided that the expenses up to that time should end not only because they were excessive but also because they were unnecessary to make the “beautiful” she liked. The result was a modernization of the neoclassical building.

The importance of the palace in the life of the Tsar was such that, in 1837, infrastructures were increased to facilitate the transfer of the imperial family. The first railway line in the nation is exactly the one that connected Saint Petersburg to Pushkin.

As already mentioned during the Second World War, the spectacular chamber of the amber was taken away and the same palace suffered irreparable damage.

In 2003, in order to commemorate the 300th anniversary of the city of St. Petersburg, an exact copy of the Amber Hall was reopened to the public, widely financed by the Russian and German governments.

Construction works were possible with these details: 24 years of work, 11 million dollars and 6 tons of amber.

How to buy tickets

Getting around among the Russian booking sites was tough. Often little intuitive and lacking in much English information, even booking a simple ticket can become a nightmare. And that’s where we come to rescue you! YAY superheroes!

You will say, “Well I just do not buy them online and take them directly there.” There may be … if you plan to visit the palace in January; in summer? Forget it! The line is infinite and the opening time is still too short. So the options are two: either go there at dawn or booking online, your call.

And for everyone who has chosen to buy via web here is how to do it:

In the official site of the building you can buy up to 4 tickets both for visiting the palace and the gardens as well as for exhibitions in other halls not more than 30 days before.

Then, you have to select the date you want (if the day can not be selected, the reasons may be two: either the building is closed or already full), to mark how many tickets you want to buy, to accept the terms and provide your email address. In a few seconds you will receive an email with the confirmation code to be included in the site along with your name, phone number and spam code. Once confirmed you will have to pay: then you will need credit / debit card details and wait for the transition confirmation. The voucher will always be sent by mail.

NB: If the mails do not arrive, check the spam folder!

The voucher, duly printed, will then be changed on the day of the visit to a special ticket located next to Church Gate. 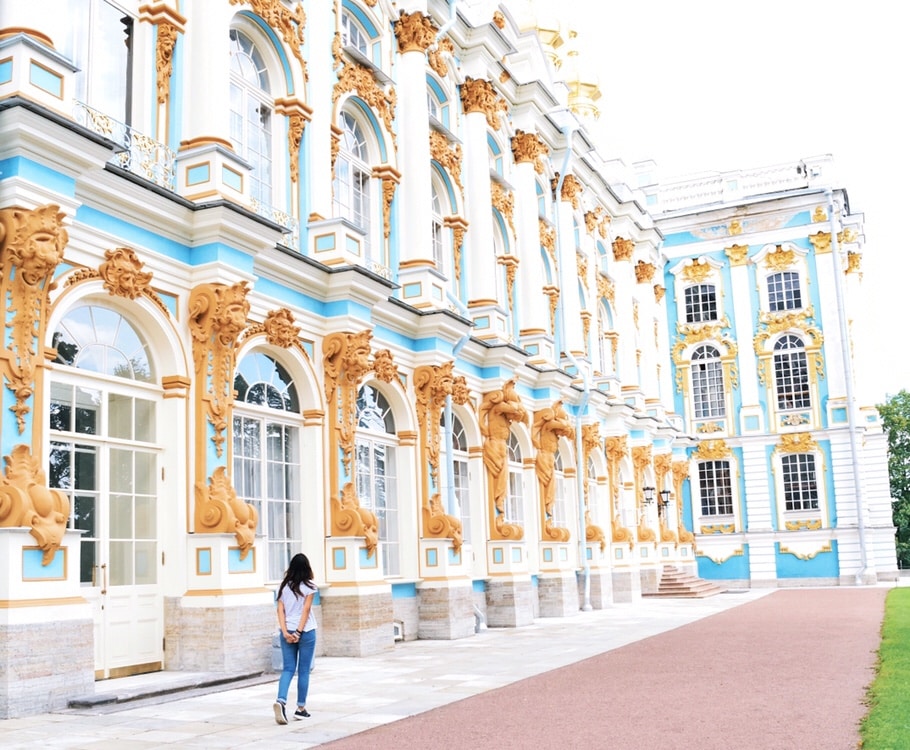 How to get there

From St. Petersburg you can get to the palace by taking public transportation or by taxi. Obviously, there are pros and cons in both cases: what the plubic transportation saves in expenses, taxi saves it in time; it will depend on your priority.

If you have little time or you have more than 2 people, the best solution is of course the taxi.

Kiwitaxi is bookable online and it will accompany you to your destination with about 20 € to get you right in front of the hotel (or where you will be asked).

NDR: The taxi holds up to 4 people.

It allows a number of combinations to be valued according to the closest stop to your accommodation.

– the suburban train + bus (or marshrutka) option: from the Vitebsky railway station you will need to take the suburban train to the Puskin station (Tsarskoye Selo). From Pushkin, buses 371 or 382 or minibuses K-371, K-377 or K-38 will take you to Caterina Palace.

Ndr. We have not yet understood how much is for a bus ride. Language difficulties have been insurmountable, always written strictly inCyrillic, and controllers werer unable to understand a word that was not Russian. Depending on the situation, we had to pay 0.70-0.90-1.10 € without ever understanding why, we tried to make guesses like “we left the urban area and there is an increase” or “there is also the suitcase and therefore occupying more space you pay more ” but for the same routes we paid different prices and so, whatever. 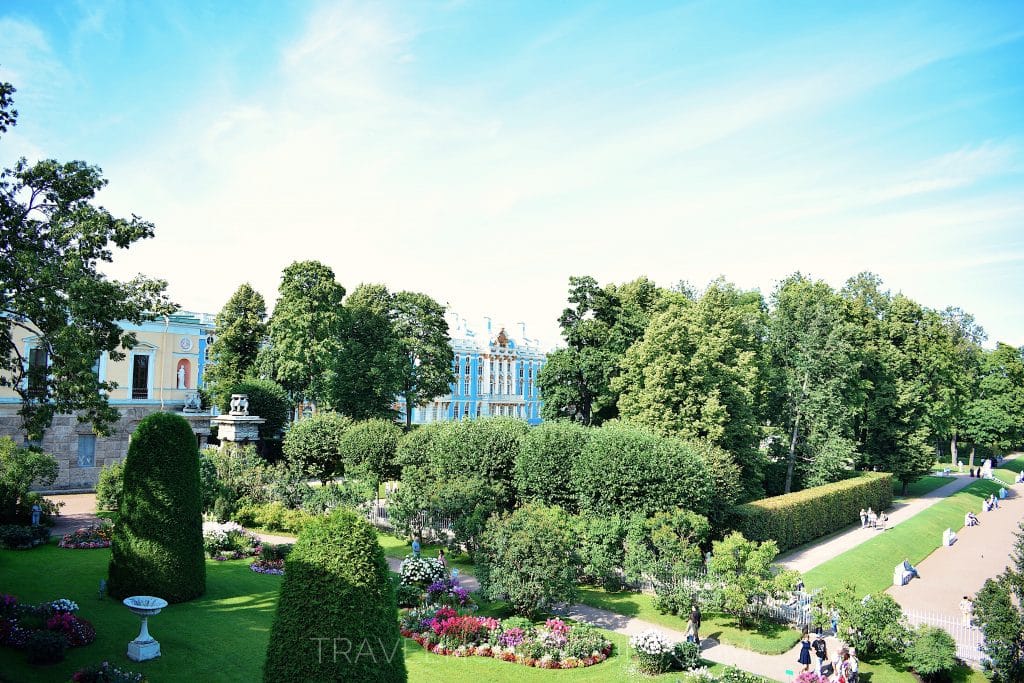 Due to the summer huge number of tourists , from June to August, the Palace is always open from 12.00 to 19.00 (except Tuesday, closing day). The park, on the other hand, it has an extended working hours from 07.00 to 23.00, with closing on Tuesdays.

From October to April the palace is also closed on the last Monday of the month.

In winter the timetables are different and may vary, so we refer you to the official website. 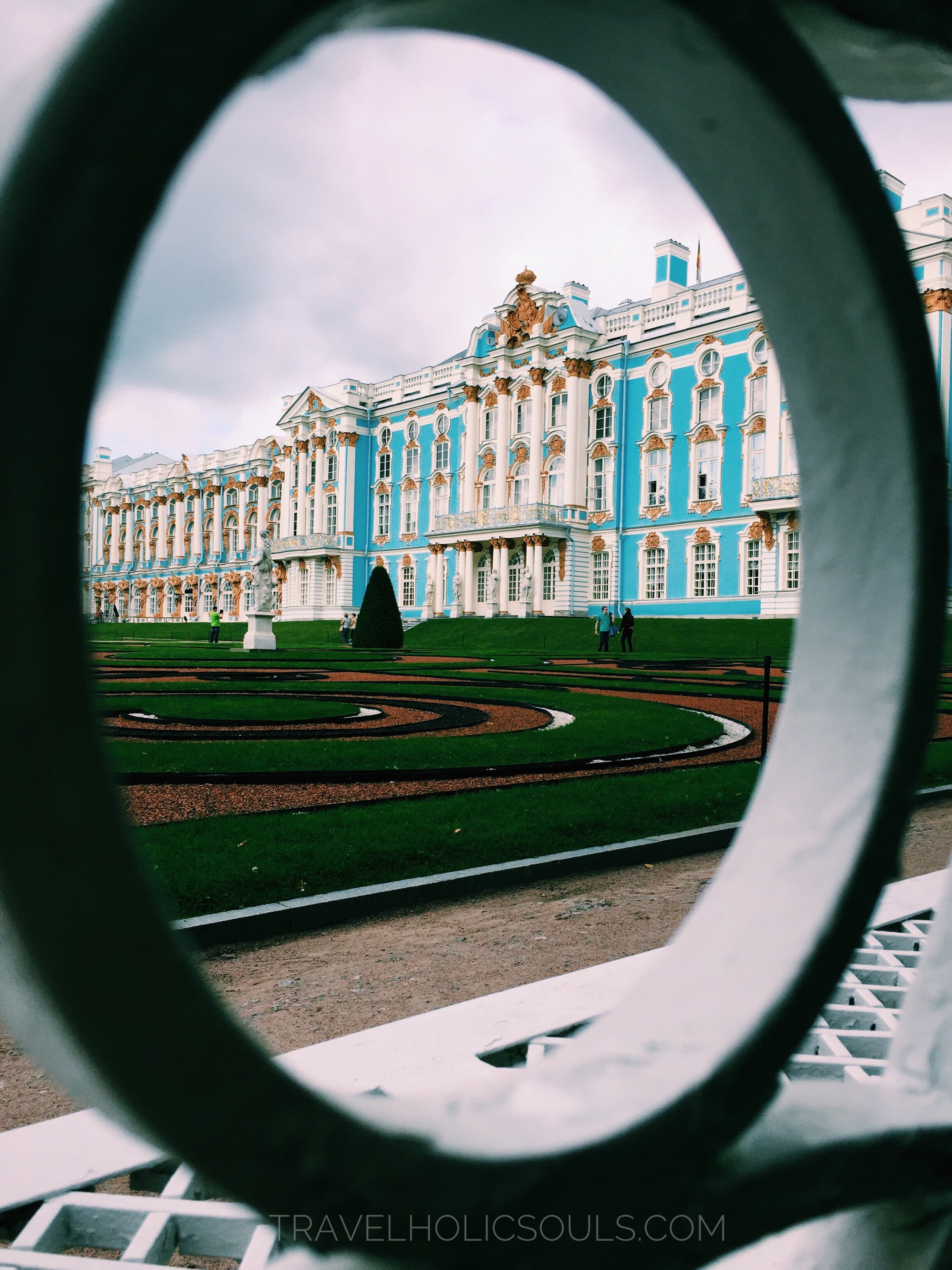